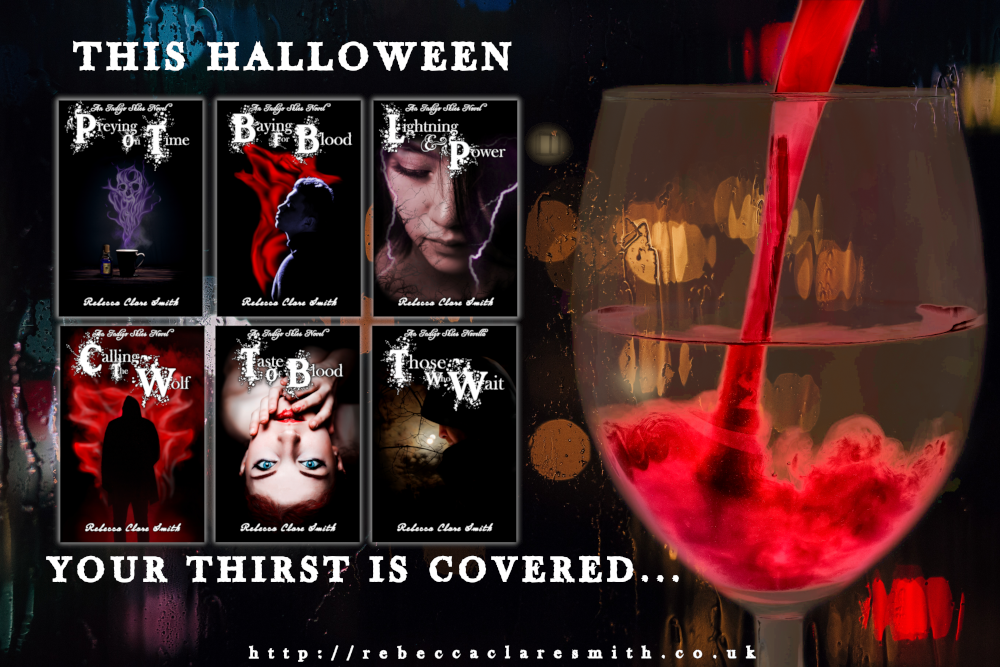 You must be ready for a Halloween read that has vampires and necromancers by now! Did you read my last post? You know, the one with the free sneak peek at the first chapter of Those Who Wait?

Well, you should be, because Those Who Wait is up for preorder now and will be released on Friday the 26th of October! That’s only six days from today!!!

You can have a sneaky Halloween read of chapter two, here, too, today: I tucked my iCom back in my pocket. My stomach had just rumbled and it was an hour past my nine o’clock curfew. The streets were already dark, but it was fine. I was with my friends. And Shay.

I glanced across at him. He was stood with two of the other guys a little farther over, steam from their vape pens rising into the adjacent alleyway. A drift of bubblegum snaked its way under our noses.

“So how long have you two been official now?” Katzia asked, fingers threading through her coloured dreadlocks as she smirked at my expression.

It was hard not to be caught looking at him.

Sure, he was a werewolf and supposed to be segregated from all off the other kids, but he was hot. He didn’t even look like most of the other werewolves in our year group. He had a handsomeness that had won over the hearts of even the most were-wary of our peers.

But he was my boyfriend.

“Two months,” I answered, feeling heat rise up my neck and tickle the necromancer mark on my nape. Self-consciously, I moved my hair to make sure it was covered, even though my concealer ought to be doing the job.

It was hard pretending that I was just a mage, sometimes. Especially when I could see the vague outline of a ghost prowling in the alley beyond. If it wasn’t for the rain, I would have convinced the others to move away from the edge of the shop awning to give myself a bit of breathing space. But trying to convince a group of teens to relinquish their safe haven in a squall without telling them the real reason was no mean feat. “Have you met his parents, yet?”

I swallowed, glancing back at his tall figure. He had strong shoulders and sexy, quaffed hair, a light tan permanently colouring his features with a soft golden glow. It was hard not to smile everytime I looked at him and thought a boy like that would want a girl like me.

“How?” Lau interjected before Katzia could.

“His dad isn’t home a lot and his mum left.”

That was the short of it, anyway.

His house was big. Almost too big, but it was teeming with people. Just not his dad or his mum. According to Shay, his whole pack lived there, but his dad was always working here, there, and everywhere. He never spoke about his mum, except to say that she’d disappeared when he was very little.

If I listened to my dad, that probably meant she was unfaithful to her packmate and they’d torn her apart and buried her. Being the daughter of a cop, I was used to gruesome stories about werewolves’ natures. Dad was always warning me not to get involved with weres or vampires. Fat chance with the latter. I’d never met a vampire in my life.

But, did I really think Mr De La Coeur was the alpha of Shay’s pack and he’d killed his mate when Shay was young?

I don’t know, for sure. What I did know was that it made me uncomfortable to think about it.

Of course, my parents were both home and alive. Our family was pretty intact. Both my mum and dad were mages, too, which meant no segregation or dirty looks in the street. And my little brother, Logan, was a mage.

Then there was me.

I was part mage and part necromancer.

The latter was a particularly strong gene that had skipped, dormant, through plenty of relatives’ genetics before it had made its unfortunate way to me. It meant I could see ghosts and talk to them, as well as shove their souls back into their corpses and control their dead bodies. All kinds of nice things like that.

Which was why my parents made me hide that side from everybody. And right now, that was one of the major arguments in our house. Neither of them wanted me to really learn more about my necromancy gifts. They wouldn’t even let me tell my friends.

But would Shay De La Coeur, a segregated werewolf, really care that I was part necromancer?

I hesitated. Would Shay want me to tell them how closely he lived with his pack? They were all just mages, pyrokinetics, and healers. They had no idea about werewolves, really. It would be harder to explain the whole situation to them.

“Well, he could invite us over once in a while!” Lau exclaimed. “Be better than us standing out here in the cold. My arse is frozen.”

Hesitation scuppered my voice, giving Sandi, who’d been eying up one of Shay’s pals until now, chance to pipe up. “They don’t want us around when they’re getting in each other’s knickers.”

My face flushed a nasty shade of beetroot.

Katzia rounded on me as if a scandal had just been revealed. “You guys have done it, right? I mean, look at him. Why wouldn’t you?” “Hey ladies,” Shay breezed in, sticking his vape pen in his pocket with a sexy smile. “Let me steal my girlfriend for a couple of minutes, would you?”

As the lads rejoined the girls, we parted from the group, stepping closer to the alleyway and its creepy contents. I tried to ignore the ghost as my back brushed up against the brickwork. Shay’s fingers twirled loose strands of my hair and then brushed down against my cold cheek as he smiled with those disabling lips of his.

“You look really hot tonight,” he muttered before catching me up in a breath-taking kiss.

Hot wasn’t net tight effect leggings and a black pinafore covered in UV reactive patches, but, with that kiss, I’d accept the compliment. His hands moved around to my backside and gave a surprise squeeze.

“I can’t wait to get you out of these clothes,” he breathed heavily, gaze flickering down over my body.

Teenage lust jived excitedly through my veins. It wasn’t as if I was underage, so even if we did have sex, my parents couldn’t make a fuss about that. I was nearly eighteen, after all. And when I finally became eighteen, they wouldn’t be making any more decisions for me.

“So, why haven’t you?” I prodded, enjoying the sensation of him pressed against me.

We’d been together two months. That was fine for the dating period to be over. Shouldn’t he be wanting more? Didn’t he?

It wasn’t as if I was actively denying him!

“My house is always full. You know that.” Begrudgingly, I did know that. “And my dad’s pack don’t like outsiders.” Which he’d also explained.

“I hate it there so much,” he hissed, cutting through my protests. “I just want to be with you. Alone.” My heart jumped. “And I know you feel the same way. We’re gonna be alone together. We will. Gonna leave this awful dump. I promise.” He bent slightly to look me in the eye. “We’ll run away. I’m sorting it.”

My heart bubbled in my chest, my next word coming out breathy with excitement. “Okay…”

He leaned in to kiss me again, the scent of him swirling around me. Then the sound of a cop car blipped nearby. I squeezed my eyes tight shut, a ball of rage unravelling in my stomach. Blue lights flickered next to our group, the window drawing down to reveal my dad’s unimpressed face looking out into the rain at us.

I grit my teeth and made muted apologies to Shay as my dad started telling my friends they needed to get off the street corner and go home. Damn him for always interfering in my life. What the hell was wrong with him? Couldn’t he just leave me alone? Couldn’t they both just leave me alone?! I got in the back of the car, nodding a sullen hello to the officer driving. There was no need for this escort. Dad had his own car. Obviously, coming in a vehicle from the unit was to embarrass me. I hated him. Didn’t he understand what he was doing to me? To my life?!

“You need to stop hanging around with that kid,” dad said as we pulled away, leaving my friends dispersing sullenly in the rain.

“The tall one. You know which one I mean, Violet. Don’t play games with me. I’m not in the mood.”

“Then why can’t you just leave me–”

“Do you think I enjoy getting phone calls mid shift from your mother to tell me you’ve missed your curfew again? No. I don’t. We should be locking up criminals right now, not ferrying you about because you can’t stick to one rule.”

“Because he’s a werewolf?! You’re such a hypocrite–”

“Your gut?!” I screamed. The car had already stopped outside our house. “Your gut?! You don’t even know him!”

I got out, slamming the door and racing across the lawn to the house, before my dad could follow me.

Those Who Wait is part of the Indigo Skies series. It’s a prequel, but it’s also a continuation of the current story arc. A previous blog post went into more detail about this, but, suffice to say, you don’t need to have read your way through the book series to fully appreciate this novella.