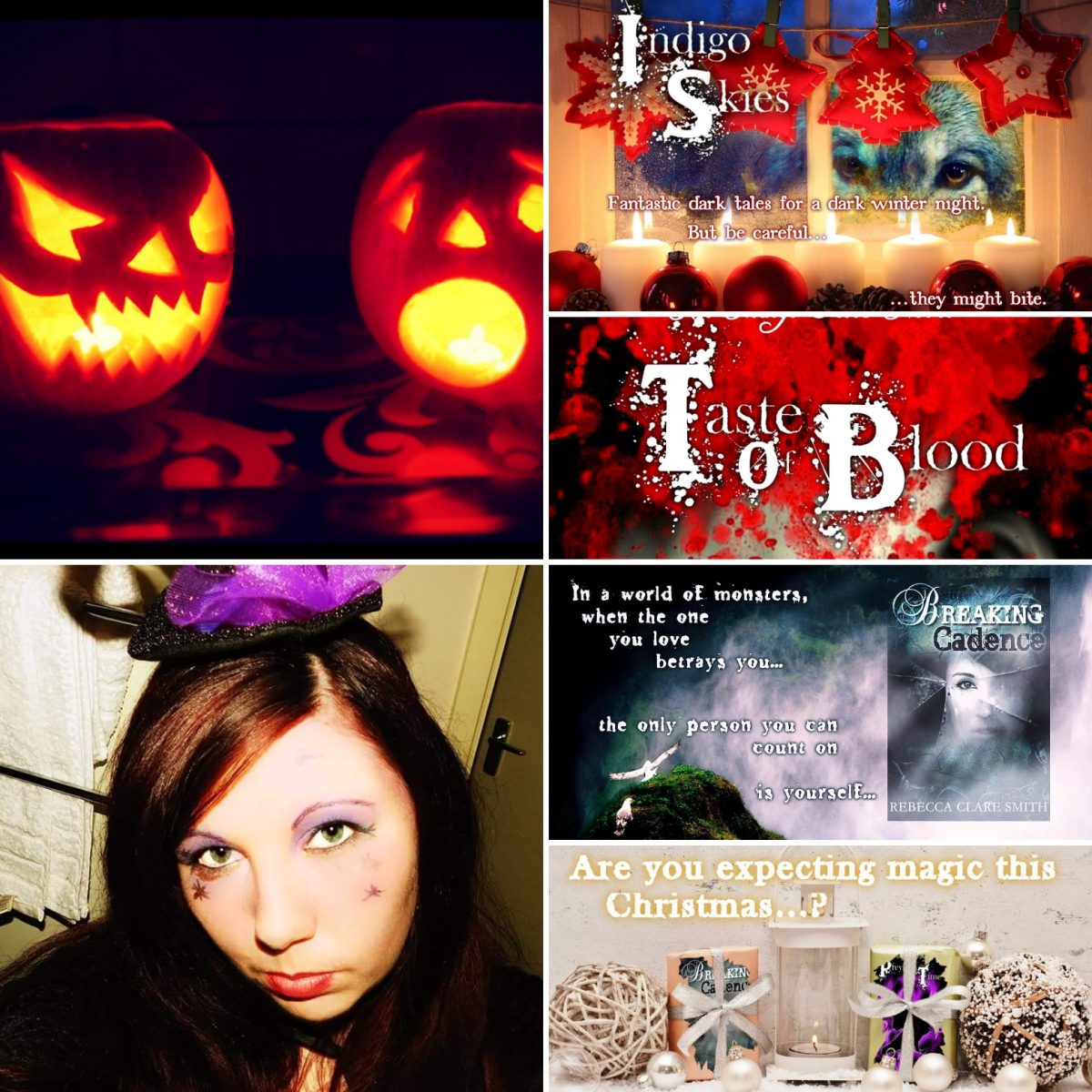 Halloween is nearly upon us but all of the local garden centres are doing Christmas special launches. As you all know, I love Christmas time. However, I love Halloween just as much.

Everything is golden brown and amber hues. Trees are shedding their old, crispy tears. And I get to watch all this from the window of my comfortable writing room. Bar the vibrant colours and satisfying (to stomp and kick) leaf piles, autumn always means Halloween to me.

It doesn’t mean everywhere smashing their Christmas stock onto the shelves as fast as they can. Though, having said that, I may have already bought a Christmas present with my meagre monies.

I do love Halloween, though, and even Mr Bear is excited about carving a pumpkin this year. The year before last was his first carving, which he enjoyed very much. That’s one tradition we can keep, then!

He’s not so keen on the dressing up, which is disappointing. I rather love the bit of Halloween where you get to dress up, be it as a monster or something related to the season, such as a black cat. Dressing up and trick or treating have never been massively popular over here in the UK, but it seems the American influence, along with their insistence on everything pumpkin flavoured, is starting to take hold.

I can’t say this disappoints me. I did, after all, get to spend one rather amazing Halloween in Hilo, Hawaii, and they did the holiday pretty damn well. Though, looking back, I don’t think I would have dressed as a princess again.

Am I princess material? Probably not.

Disappointing, but isn’t it better to have minions than servants and wouldn’t you rather be the cool one rescuing yourself than waiting for some golden haired prince with puckered lips to do the job?

Anyway, here’s hoping I can convince Howard to Halloween it up and take me somewhere spooky and fun. If I’m extra lucky, he might even consider a terrifying costume.

Is no longer elusive.

That’s right! I start a new job this week after my long and arduous search. I’m hoping that it’s going to be good. My interview was pretty nice and the lady that conducted it, my new manager, seemed pretty awesome so at least there’s that.

So, please, wish me luck. It’s along the lines of things I’ve done before, but it’s around the 16-20 hours mark. I’m hoping that’s going to give me much more time with Howard Bear and that I’ll have more days to write. Which leads us to…

Have you seen the wordcount on the main page?!

I’ve kicked up over 20k words this month and last month on the sequel that is Taste Of Blood. Part of that was due to the excitement of new covers for the series. Part of it was simply due to finally getting my writing room into a comfortable space to house my creative juices.

It might also be because Halloween is around the corner and I can’t help but feel like vampires, necromancers and mages are the solution to this. I even have a working blurb to go with the book. See what you think:

Death is on the cards & time is ticking out. A taste of blood is the least of a necromancer detective’s worries…

Wrenched from her comfort zone & flung into the past, supernatural being & private investigator Violet Eonsen must catch a vampire hellbent on revenge before the present is erased for good.

Trying to keep the timeline untouched is one thing, but dealing with an up spike in her supernatural abilities is another. Bursts of magic & uncontrollable reactions to death aren’t easy to hide. Can she keep both in check whilst under Simon’s watchful eye & still foil the villain? Dragged along for yet another adventure he never wanted, Simon is fighting not only to keep his present intact, but to make sure crazed vampire Lia doesn’t murder his past self. Maybe then he can choose his own path in time.

Can the duo defeat Lia once more? Or is this case more than they both bargained for?

& why does Violet feel like it’s not just this vampire watching her every step…?

Of course, Taste Of Blood isn’t the only work in progress on my mind. I’m also inundated with thoughts about The Payment Girls, but I feel like I can most definitely not start looking into that properly until the first draft of Taste is at least complete. I have, however, been mocking up some newer banners ready for the Christmas season. I feel like I missed my slot to get images ready for Halloween, so my plan is to do that ready for next year, once the Christmas bits are out of the way. Which is your favourite so far? Would they make you pick up one of my books?

Of course, we’re about ready to start the next stage of our new house. The garden is as far as we can get it before winter. It’s at quite a good place, to be honest. Which means that we are going to be moving on to decorating the house.

My hope is to get the living room at least painted before the time to put up Christmas decorations rocks around. I don’t know if that will happen, so I’ll cross my fingers. We still have to order paint and strip wallpaper from the side of the room with the chimney breast present. That’s going to be a lovely warm red and then the rest will be a pale gold colour.

For that one, I’m currently looking at a shade aptly named Trench Coat to belong in a house with two Supernatural lovers (here’s to you, Misha Collins). Sadly, I think if I emblazoned actual pictures of the boys on my living room walls Howard Bear might not be very impressed. I think I might get away with it in my writing room, though.

I mean, who could resist these guys on their walls?

Ahem. Anyway…. (yes, I’m totally trying to make up for the fact that I haven’t seen season 12 and season 13 is airing in the USA)…

I realise that I’ve written this whole blog post whilst still in my dressing gown, which reminds me oddly of Jane Wenham-Jones’s Wannabe A Writer and makes me feel like I have somehow made it. It’s not that it’s early in the day. It’s just that I started this when I got my first cup of tea and haven’t moved, yet. (This post is scheduled for later in the day, I promise).

Anyway, as much as I like rabbiting on about the rubbish that I’ve gotten up to, I’m going to have leave this blogpost there and get on with some house chores so I can cram some more writing in a bit later on!