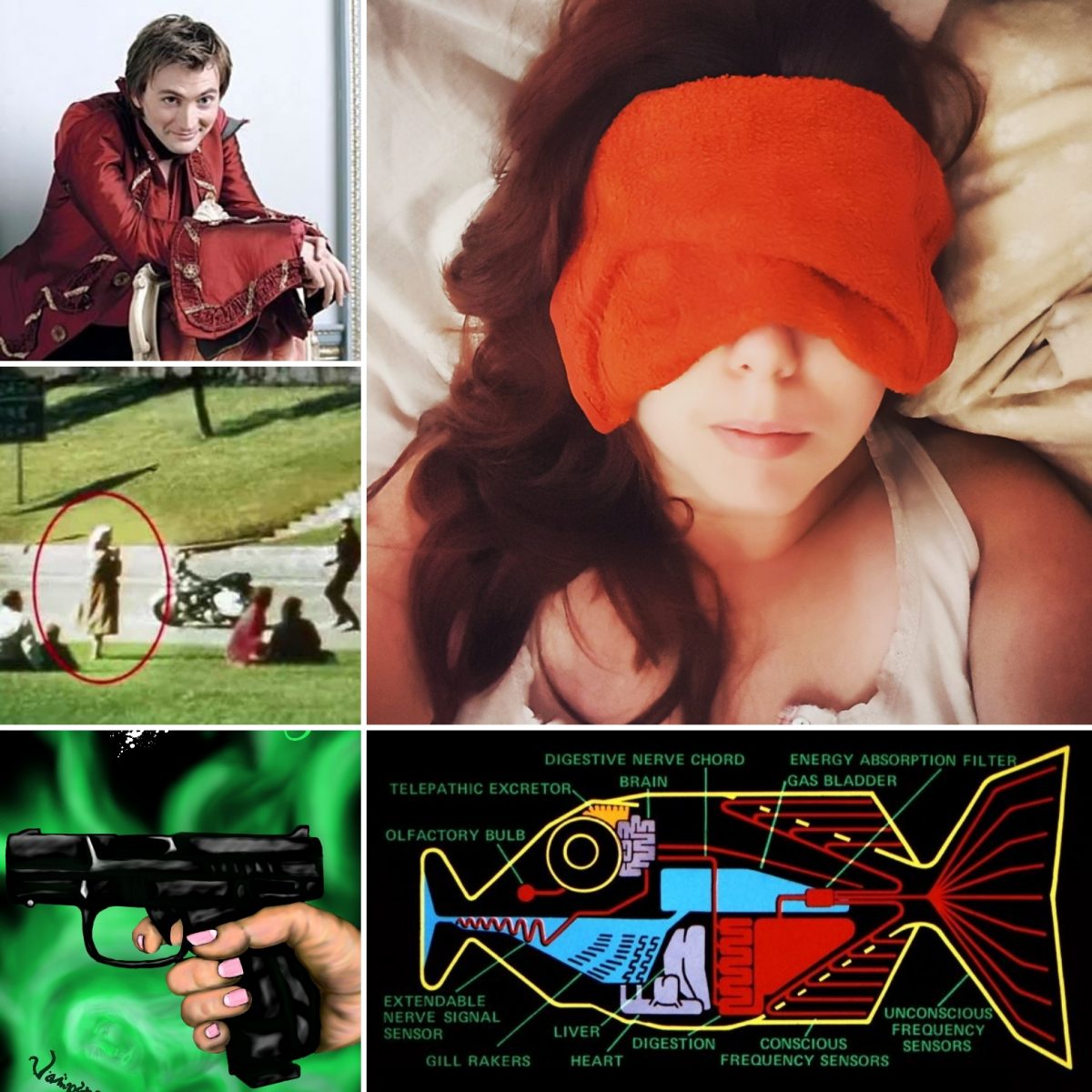 It’s time for another Top 10 post & this week it’s my Top 10 Items To Take Time Travelling! As you may know, I’m quite fond of the idea of time travel. I think it’s a complex thing to try to work out. After all, if you go into the past and cause an event to happen, does that mean that event was always going to happen in order to create the future you remember or have you indeed created a paradox and returned to the future to find that Biff Tannen has married your mother?

As a side note, 88mph seems pretty slow to be entering a time field.

It may be obvious to those of you who’ve read my Indigo Skies series how much I ponder over the idea of paradoxes versus a continuous stream. And I’m even at it again in the next book, Taste of Blood, which there will be more news on next week!

– I don’t condone violence against people in time. That’s why this is number ten on the Top 10 Items To Take Time Travelling list. There are a number of factors to consider when taking a weapon time travelling. One of those is: do you really need it?

I mean, you don’t want to cause a paradox and alter time by killing somebody (even if you think they deserved it). Say you went back in time and killed John Wilkes Booth before he could assassinate Lincoln. That might seem like a positive thing to do, but what if that meant Lincoln lived longer and made a couple of extra laws that directly affected your distant relatives? You could wipe out your parents’ existences and therefore delete yourself from time. So a weapon is not the best idea, but, equally, if you meet a monstrous crocodile that wants to kill you it might be good to have some form of defence.

– How else do you think I caught footage of JFK’s assassination? I was the Babushka Lady! Ah, of course I wasn’t. But you have to admit that it would have been a great time travelling disguise to watch an incredible piece of American history unfold. Not that all of history is American assassinations. And at least just having pictures of the event would mean you hadn’t meddled with the timeline in anyway.

Plus, how else are you supposed to show off to your friends?

– Next on my Top 10 Items To Take Time Travelling are encyclopaedias. It would be great to suggest you simply take a phone with Google or Wikipedia on, but there’s no guarantee that you’ll either be able to get internet or that your phone will be able to connect to whatever internet system there is in the future. And that’s before you even realise that either of these services might not exist yet anyway (it was Google’s 19th birthday a week ago!).

So, I suggest encyclopaedias. You don’t even have to scurry around trying to make electricity in a medieval village to charge them.

However, encyclopaedias aren’t light. Carrying them around would be no easy feat, which is why this is only a suggestion if your method of time travel involves a machine you can transport. Say a blue one that looks like a police box.

– Again, unless you can find a really itty bitty device in the future that charges itself on the electrical current your body naturally exudes, then this is only if you have your time machine with you. Without a guarantee of the future being filled with these devices, though, you’ll just have to stock up on the paper kind. They’re still just as comprehensive and you won’t have to charge them either. Of course, if you don’t see the point then that’s fine, but when you end up in lands that have yet to be conquered by the British Empire or won’t be (Shh! Don’t tell the Queen I said that!), you’ll thank me.

– When is a notebook and pen not a great accessory? Maybe you need it to jot down a faux pas and remember what century it’s from. Or it could just be so you can keep a diary of your travels. Either way, a notebook and pen is a great addition to any Top 10 Items To Take Time Travelling.

Not to mention, if you do decide against the tenth item on this list, you can always stab somebody with a pen. After all, it’s mightier than a sword.

– A little higher on the list is a backpack. Obviously, it wouldn’t be the best thing to wear in the Hunnic Empire, but it’s practical and would help you to store your pen and notebook periodically.

No.4 : Change Of Clothes

– These can go in your backpack! I would suggest a couple of changes of clothing. As long as they’re not flashy and they can fit in several different centuries then you should be able to get away with as few changes as possible. You’ve got to remember that you’ll be carrying these on your back. And if you don’t have a backpack, well…

But seriously. The aim is to blend in. You don’t want to show up in the Dark Age wearing Nikes and Ray Bans. You might look cool, but that’ll soon change once you’re atop a pyre being burned for sorcery. Like any girl on prom night, you need to get your time travel outfit right.

– Why are these on my Top 10 Items To Take Time Travelling? Well, isn’t it obvious? We’ve already discussed the butterfly effect thing. And then there’s a whole load of other nasty stuff you have to watch out for when copulating through time.

Hell, stepping out for some nookie in Cassanova’s Venice could bring you a little more than you bargained for if you don’t keep yourself clean!

– We’re at number two on the Top 10 Items To Take Time Travelling list! And I think this a pretty important item. After all, we’ve drastically improved our understanding of ill health over the years and so a modern first aid kit seems like a great idea. I mean, do you want to end up in Victorian London covered in leeches because your bread and dripping turned your stomach dodgy?

No. I wouldn’t either.

So a first aid kit would definitely be an advantage. Which brings us to number one…

– The Hitchhiker’s Guide To The Galaxy recommends towels for travelling through space, but I think it deserves to be on a Top 10 Items To Take Time Travelling, too. And just why that might be? Well, I’ll let the man himself explain…

A towel, it says, is about the most massively useful thing an interstellar hitchhiker can have. Partly it has great practical value. You can wrap it around you for warmth as you bound across the cold moons of Jaglan Beta; you can lie on it on the brilliant marble-sanded beaches of Santraginus V, inhaling the heady sea vapours; you can sleep under it beneath the stars which shine so redly on the desert world of Kakrafoon; use it to sail a miniraft down the slow heavy River Moth; wet it for use in hand-to-hand-combat; wrap it round your head to ward off noxious fumes or avoid the gaze of the Ravenous Bugblatter Beast of Traal (such a mind-bogglingly stupid animal, it assumes that if you can’t see it, it can’t see you — daft as a brush, but very very ravenous); you can wave your towel in emergencies as a distress signal, and of course dry yourself off with it if it still seems to be clean enough. More importantly, a towel has immense psychological value. For some reason, if a strag (strag: non-hitch hiker) discovers that a hitchhiker has his towel with him, he will automatically assume that he is also in possession of a toothbrush, face flannel, soap, tin of biscuits, flask, compass, map, ball of string, gnat spray, wet weather gear, space suit etc., etc. Furthermore, the strag will then happily lend the hitch hiker any of these or a dozen other items that the hitch hiker might accidentally have “lost.” What the strag will think is that any man who can hitch the length and breadth of the galaxy, rough it, slum it, struggle against terrible odds, win through, and still knows where his towel is, is clearly a man to be reckoned with.

Hence a phrase that has passed into hitchhiking slang, as in “Hey, you sass that hoopy Ford Prefect? There’s a frood who really knows where his towel is.” (Sass: know, be aware of, meet, have sex with; hoopy: really together guy; frood: really amazingly together guy.)[original wikipedia source]

— Douglas Adams, The Hitchhiker’s Guide to the Galaxy

Do you think this is a good list over all? Do you have any suggestions of anything that should be on here instead? And are you planning to time travel anytime soon? Maybe a round the century trip. Don’t forget your towel!