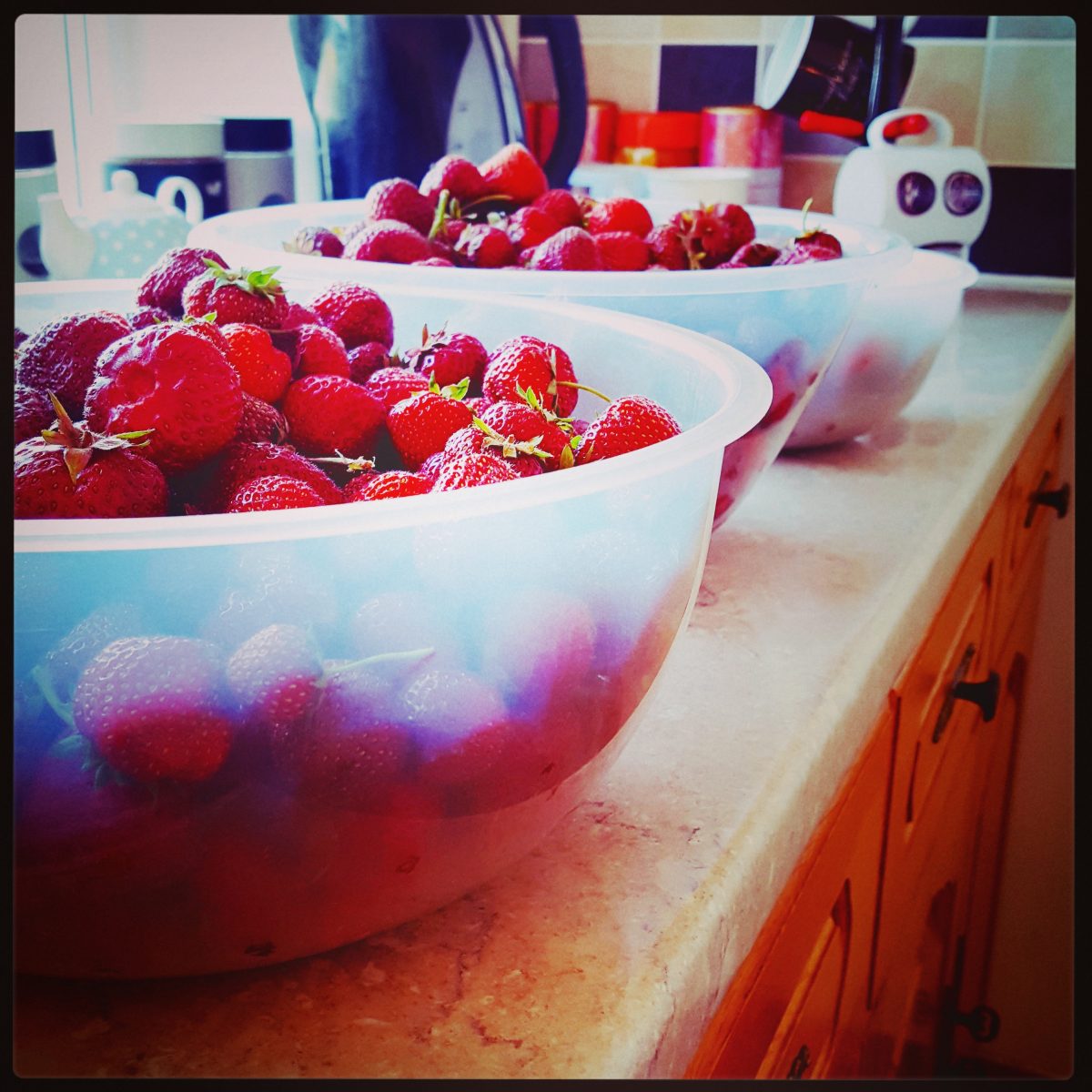 It’s been a busy, tiring week in new house land. Gardening is taking its toll both physically and mentally. We have tonnes to do.

Of course, it’s decided to rain today, which is not the best weather to be traipsing around a plot of land that is basically just mud. Ergo, nothing much has been achieved.

I have, however, managed to get a few other bits and pieces done, all whilst plagued by the incessant smell of strawberries. As you may be able to tell by the top picture, we are overrun. There are three lines of strawberry plants in my garden. And boy do they give fruit!

The problem is we just cannot manage to eat all of it by ourselves. It’s a shame, really. The strawberries are actually extremely good, but we just can’t manage them. Everybody I know has suggested I make jam out of them, but I’d end up with years’ worth of jam. It would be ridiculous.

It already is ridiculous!

And there are more growing, too. However, I’m not picking any more right now. Instead, I’ve been on the job trail. After all, what else do you do on a wet and miserable day? Especially when you don’t yet have a writing desk.

I’ve been tightening up my CV and filling out application forms. I’ll be truly grateful when I find a new job, but the finding is, as ever, tedious. I have no problem with the interviews and such. It’s some of the application forms.

Not one of them is alike, which, I suppose, is a good thing, but it also means that even though they want the same data (such as previous jobs), they ask you to put that in manually as well as send a CV with the same information on there. I don’t understand why I’m sending in the separate CV, too. It doesn’t tell them anything different to what they’ve pretty much already asked me.

Can’t I send in my CV and only fill in the extraneous, job specific things separately?

Maybe I am unemployed, but that doesn’t mean that I have all the time in the world on my hands. I promise you, I really don’t. If I’m not working, I busy myself with writing or household chores or jobs that should get done but don’t or the garden (my new great love). Surely that’s what you’re supposed to do when you’re unemployed?

I don’t know. I’m not being ungrateful. I would just like it to be a more time efficient process. I think it would help both employers and prospective employees.

And now to the writing…

Writing is not currently something I have been efficient in pursuing. I think that’s partly because there’s still a lot of changing bits and pieces, such as notifying places that we’ve moved. Nevertheless, I think it’s also because, even though I now have a writing room, as previously mentioned, I don’t actually have a desk to write at.

That doesn’t sound too bad seeing as I haven’t had a desk for four years, now, but the flat was very different. Where I wrote was a central room that doubled as a living room, eating area (it doesn’t deserve the term dining room), kitchen, social area, and writing space. It wasn’t one thing and, often times, that would disrupt my ability to write.

Now I have the physical space to write, but I just don’t have the means to do it when there’s no desk or seating area. That’s why I’m keeping my eyes peeled for a cheap desk or writing bureau. On the plus side, at least I do have somewhere to exist whilst creating, unlike the people suffering in the Grenfell Tower incident.

However, I was alerted via Kathy Burke‘s appearance on The Last Leg that there’s an account called Twenty4Stories that’s hoping to make a positive impact on the survivors. They intend to collect twenty-four stories, the same number of storeys the building held, and sell them in a collection to help raise money for the building’s former residents.

I’m hoping that I can come up with and write a short story of good enough quality to submit by the closing date. I’m helping to do my bit. Why not get involved, too?