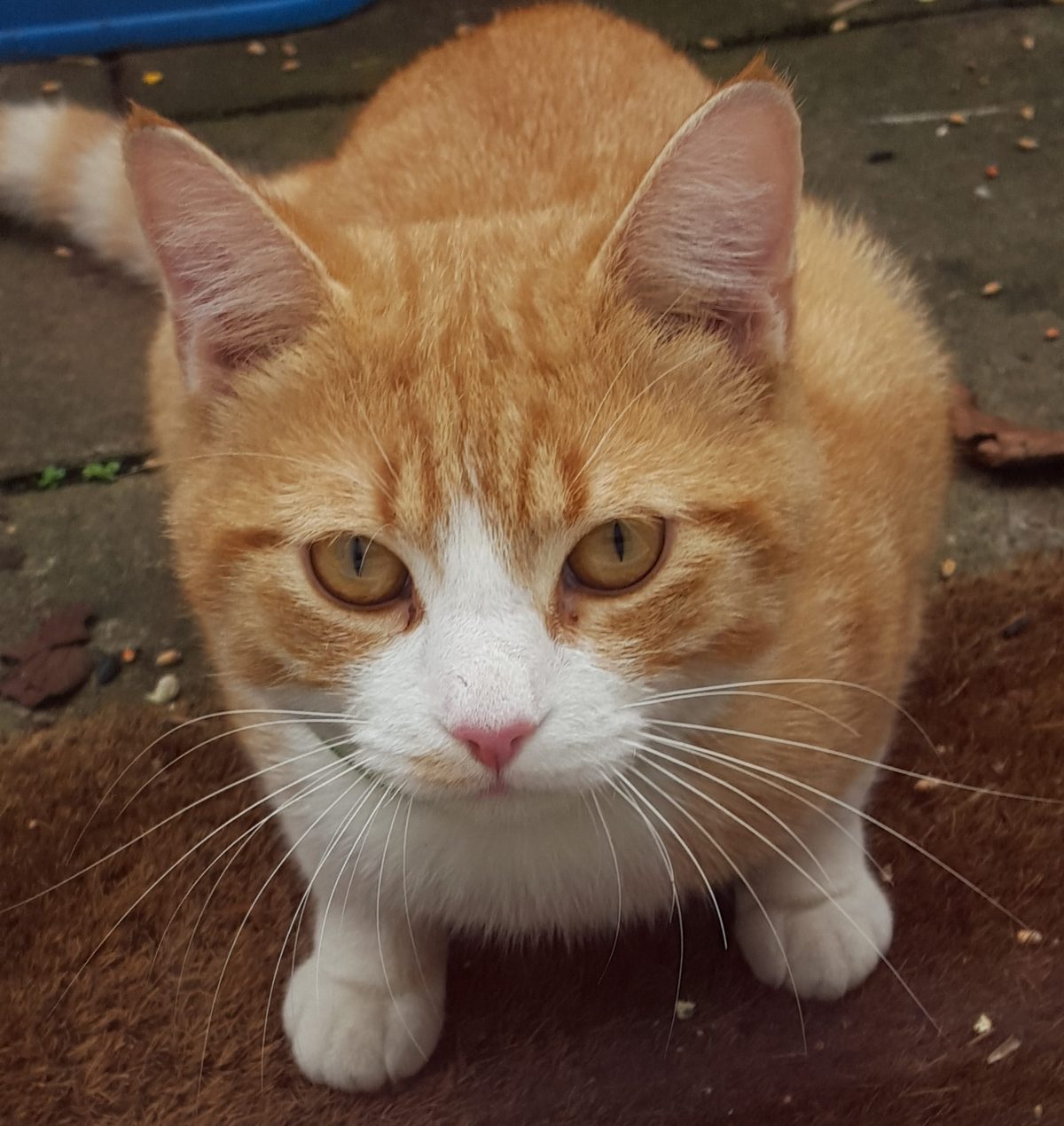 In a departure from the usual topics, today I want to tell you all about Schrödinger’s cat. Of course, Schrödinger is not really the owner of this particular cat. In fact, I’m not sure what her name is, but since this is one of those real life stupid stories, I thought you might like to hear it.

The story starts months ago when a ginger and white cat started showing up at our front door. Now, we already have cats and they weren’t particularly pleased with this new development. Of course, Mr Ginger wasn’t bothered by this.

He seemed pretty skinny and hungry so I was worried that he was a stray or lost cat. I posted on the local lost and found pets group on facebook, but nobody answered to say that he was their cat.

Worried for him, I slipped a paper collar around his neck after suggestions from others online. A paper collar is a fantastic way to discover whether a cat has a home without causing it the stress of catnapping and dragging it off to a vet to check if it’s microchipped, which can cause a lot more harm than good. So Mr Ginger got a nice green paper one.

And I got a phone call after about ten minutes…

The woman said that she owned the ginger one and that his name was Worzel. Now, I’m not entirely taken with his name, but anyway…

So this woman sounded slightly annoyed that I’d put a collar on her cat, but isn’t that better than catnapping him? I thought so. And after that I didn’t think much more about it except to try to warn Worzel off when he harassed my two cats. Then I got another phone call…

This was at 9am in the morning on my first day in ages, so, as you can imagine, I was not very awake. It was Worzel’s dotty owner again and she wanted to know if I’d seen him. I’d only commented to Howard Bear that I hadn’t seen the cat in a couple of weeks only a few days before. Anyway, I told her the same and she informed me that he hadn’t been home in five days and she was worried. Groggily, I agreed to keep an eye out. After a cup of tea to wake me up, it occurred to me that the same facebook group I’d used to try to find out the identity of her cat had recently had a post alert about a ginger cat that had been found unfortunately deceased at the side of the road. Now, this particular moggy had no microchip so nobody could find out who he belonged to.

More awake, I sent the woman a text to say she might want to check the site, not wanting to tell her about the deceased cat, just in case. She thanked me and said she’d check. Later on, I sent a message to see how her search was going and she informed me that Worzel had been knocked down by a car and she’d buried him in her garden.

Of course, I felt bad for her, but I didn’t think too much more about it, until…

Obviously, I rang his hapless owner straight away. The conversation went something like this:

Me: Hello. Is this the woman who owned Worzel?

Me: I’m pretty sure he just turned up at my front door.

Me: I thought you’d buried him?

Her: Oh yes. That wasn’t him. The vet got it wrong. I don’t know whose cat that was. So yeah, Schrödinger’s Cat is most definitely alive in this case. Even though his hapless owner has buried somebody else’s cat in her garden. I just don’t understand how she can blame the vet for getting whose cat it was wrong. Surely she knows her own cat when she sees it? Because I find it difficult to believe that a microchip could be mistaken when the whole point is that it can only identify one singular cat!