Well. it’s been a long and arduous week so far. I’ve ended up on shifts at either the very beginning or the very end of the day at work, so tiredness is ruling. Not to mention, I seem to have become the victim of yet another sore throat. That covers two of the title points and goes some way to explaining why the word count for Baying For Blood hasn’t increased lately. Hopefully, the illness will ease then I can get some scribbling done.

On another note, I did speak about doing a vlog after my friend and fellow writer Andy P Wood had started with his #Walkcast vlogs. Where I live, there aren’t many places to go walking except for the beach, which is usually very busy unless it’s raining or windy so a walking vlog wasn’t really something I could do.

So, I have vlogged. But it’s not one that involves walking. It does, however, have some comical video injections of my other half spliced in. I’m not sure he appreciates that. He’s not keen on being either in pictures or videos, which is fair enough. It means that he didn’t want to watch himself in my video and thus stopped him from seeing the whole thing, which is also fine by me. I’m not entirely comfortable on camera. There are lots of outtakes whereby I sit in silence looking puzzled as to what to say next or hold long ‘ummmms’.

However, the video is below for you guys in case you haven’t seen it. It’s also on my youtube channel along with various other videos and book trailers and such, so do feel free to peruse them at your leisure. 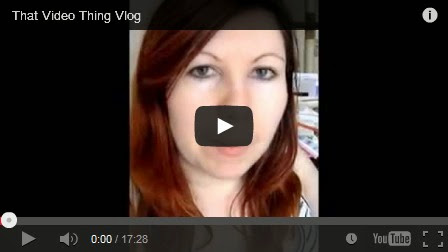 In case you want to find the guys that I mentioned, here’s a list of their names and favourite places to hang out on the web…

As I was saying in the vlog, it was mine and Bear’s anniversary last Saturday. Sadly I was working, but on the night I recorded the vlog we went out for dinner to celebrate our two years together.

It was nice just to be able to relax together and spend some proper time together instead of in front of the television or snatched in between work. Sadly, I don’t think we get to do enough of that. It’s refreshing when we do and I’m always left feeling happier and more content. It was also quite nice not to have to cook dinner for a change, too.

And I think that’s all I have to tell you for the minute, guys. Hopefully the next blog post will involve actual progress on Baying For Blood, but I guess we’ll see. Wish me luck.