This is what the lady on the phone asked me last night when trying to direct me to the right service because my tooth has broken and I was crying and twisting my hands into knots because that’s what I do when I panic. The tooth is still broken, by the way, but I’ll get to that in a minute.

I’m not really good at the whole being touched by anybody (physically) thing and somebody poking around in my mouth while I force myself to lie prone on a chair that’s tipped back, feeling every vibration and scrape as they probe my teeth and gums whilst leaning over me and therefore blocking my escape… Well, that just absolutely terrifies me in the most irrational way possible.

I don’t like going to the doctors either but it’s very rare that when I do go (which is hardly ever because I’m normally quite fit & I’d probably avoid it if I could anyway) the doctor will need to examine me in any intimate way. My mum once came with me and the doctor examined my stomach (simply by just pressing it for some reason). I’m not even sure why he did that because I was there for my migraines and even if he did explain his motives they were entirely lost on me the moment he touched me and I froze solid to the table until he’d finished.

Anyway… The nearest appointment that I could book with a dentist is in four weeks time, as I haven’t been registered for a while and nobody can help me with my broken tooth. It’s quite sharp. It’s also not an emergency because I’m not bleeding heavily and not currently in any pain. But they won’t give me an appointment to help keep it this way either. So maybe I should just hit it with a hammer and then crawl into the surgery like something out of Fight Club and bubble blood all over the help desk until somebody actually does help me.

Bit of a rant today. I apologise.

We’re also pretty much out of money for this month. I’m in my overdraft and so is my other half. He doesn’t get paid until the end of the month. I get paid every Friday but I’m still going to be in it for a while. We’re pretty much using whatever tip money I get from work so that we can eat on a regular basis (though this may now be tricky for me for a while).

Then there’s the car problems…

My car is broken (again). It’s not set on fire, though, so try not to worry too much. It is, however, not well and I don’t really have the money to fix it right now. The problem is that it’s not firing on all cylinders. I’m not getting enough power from it and it’s doing this lovely juddering/growling thing.

So yeah… everything is absolutely tip top. The only possible thing that made it worse was that Bear tried to cut his own hair and his attempt made me want to cry up to the point where I could feel my eyes welling up. It’s more okay than it was now, though. We’ve rectified it quite a bit so he looks less like a badly sheared hedgerow.

My mum is hopefully coming to cut my hair some time near the end of the month as I can’t afford to go to a hairdressers anyway. Mostly I think it’s an excuse to come see a little somebody (not me), though.

Two things have sort of cheered us up lately. One is that a good friend visited, which I’m terribly glad of because it was nice to see him and it put a smile on Bear’s face despite the fact we couldn’t afford to go to his colleague’s birthday party (which he’d felt terrible about). And the second is that we finally got to bring Barley Biscuit home with us. 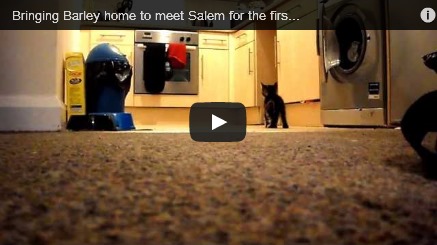 As yet, Salem is not impressed by the latter development, but he’ll come around eventually. Barley has already tried to play with him. He’s just not figured out that jumping on Salem’s tail isn’t the best way to make friends.

The little one is very cute, though. He’s taken to following us from room to room and is very vocal about wanting anything. Here are some pictures of the little monster:

There are plenty of videos of him on my youtube channel so feel free to have a look. Anyway, I’ll go sort things out now and will be judging #SatSunTails later on.