I put my heart in a letter the other night. This letter will probably never see its recipient. It was never meant to be posted anyway – it was just a way to help me get to sleep and stop thinking things out.

A very good friend of mine, one of the best, once told me about how writing letters to people (even if you don’t send them) can help you to deal with things. Maybe it’s because you get out the things you want to say but can’t since you don’t have to worry about what the other person will think and how they’ll react.

Some of us are trapped by thoughts of others (hence my Rabbit Hearted Girl post).

Getting things out is a big reason why I write this blog. That’s how it started out – just getting things off my chest. I don’t discuss everything here, but most of it. It’s become a real help to me over time. The things I can’t say here, though, I’ve written in a letter to the person concerned.

Like I say, they’re not likely to receive this letter or read it. I may not have gained any answers or indication of things from it, but at least everything I was thinking was on paper instead of in my head. It’s like having Dumbledore’s pensieve. It’s a shame that they’re not real and we can’t siphon our own stressful thoughts into a bowl. Sometimes I’d really like to do that so that I can get a bit more clarity.

I don’t mind telling you I’m still confused, still upset, still angry & hateful, and yet stupidly hopeful. I shouldn’t be hopeful. I know that, but there are some things that your heart won’t listen to no matter what you say or how futile it is or how illogical you know it to be. 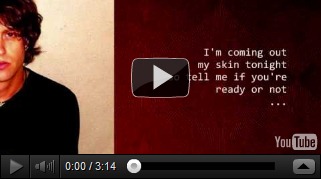 Anyway, I’ve mithered enough for yet another blog post.

It’s my second post in a week on general things instead of alternating to fiction as I usually do. Saturday’s entry, however, was just something that I needed to write out whilst it was going through my head. If I hadn’t then I might never have written the post and gotten so many excellent responses.

Anyway, we’ll get on down to other news.

I’ve finally started slowly editing my WIP. It’s going quite well so far and the total word count at the side will fluctuate as I chop and flesh out. I’m determined to get this piece to somewhere great before I start letting beta readers get hold of it.

Hopefully this process won’t take too long and isn’t going to be hampered by anything else kicking off in my life or more depression. At the moment I’m staving it off by ignoring everything, which isn’t the best way to deal with things but until something more constructive comes up this will have to do. At least it means that I get something done.

I also got my new car that I was telling you about before!

It’s called Pandorica after the prison box used to encapsulate the Doctor in Doctor Who. However, forty-five minutes after getting it I accidentally locked the keys in the car… and my sister-in-law (the previous owner) still had the spare. So much to my chagrin we had to call out one of the AA men to unlock it for me, which was both exciting and embarrassing.

I’m also never letting the keys out of my sight again. And certainly not when I’m locking the car door.

The white lines are where I’ve rather crudely erased the number plate. This is perhaps the reason why my mood has been focused enough to edit – it’s given me a little lift.

Also, NaNo-ers, how are you doing so far with the challenge?