So last night a rather exciting thing occurred. That’s right the advert was on. The special advert. And everybody knows what it means when the advert is on television. There’s even at least one facebook page dedicated to the meaning of the advert. It has the same meaning to thousands of people.

The coca cola Christmas advert was on television. 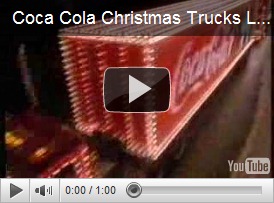 Thanks to bizkittoby for uploading.

Everyone knows that once the coca cola Christmas truck advert has been on television it really is the start of the Christmas season.

On one level, this could be marked as mindless consumerism but on another it could be regarded as something that brings a lot of cheer to a lot of people all at once. It’s a sign of the season of good will, which, despite the fact that it is promoting a brand name, seems like a good thing in my book. After all, something that makes people smile and get all bubbly inside thinking of what they’re going to surprise family and friends with on one cosy day of the year has to be at least a little bit good. Right?

Of course, this has put me in a very Christmassy mood. I have delved through my stash of CDs for the car (we haven’t upgraded to an mp3 device yet) to find my seasonal CD. I have to admit that it does contain a lot of ‘emo’ songs on it, but some of them are quite uncharacteristically cheery.

This is on the CD and it makes me smile because it is the opposite to how I feel about Christmas. It’s a very cynical take on it, but true in the case of some people who don’t seem to understand that it’s more about giving than anything else. 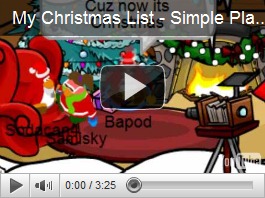 Thanks to BapodCpmv for uploading.

Yule Shoot Your Eye Out by Fall Out Boy and Forget December by Something Corporate are also a couple of my favourite unconventional Christmas songs.

I’ve already been looking at presents that I can give to people and we haven’t even jumped into December yet! But you may have seen that I already have my Christmas outfit sorted for going out. If you haven’t then this is a quick peek at the dress and shoes. I’m very pleased with them.

And now I’m going to get on with a bit of flash fiction. I may or may not post this here later on today. If I don’t then rest assured that it will most definitely be up tomorrow.