It’s a very strange thing indeed being a lollipop lady. Everybody always says hello to you when you’re wandering around in your uniform with your big lollipop stick. You get a lot of ‘good mornings’ from people who aren’t even crossing the road with you. It’s really lovely to see (as Shakespeare would say) the milk of human kindness.

As much as I like the fact that people do say hello to me everyday, it does draw to my attention how much they don’t even want to look at you if you’re not wearing your uniform. And maybe I’ve got the reasoning wrong. Maybe it isn’t for the reason that I think it is. Maybe mine is just a cacophony of pessimistic thoughts…

But it seems to me that the only reason people don’t smile or make eye contact with me when I’m out of my uniform is simply because they are afraid.

Why should they be afraid?

Well, haven’t you seen the news lately? People under twenty-five are yobs and steal things as well as jumping and mugging you and everybody else is a sex attacker. Okay, so maybe I’m being a bit melodramatic, but this is the conclusion that

I’ve come to. Nobody properly interacts any more. I mean, they don’t even nod their heads in acknowledgement.

I’m not saying I do, which is obvious hypocrisy, but that’s the way we’ve been conditioned these days. If somebody you don’t know says hello to you, you immediately assume they’re after something or they’re going to attack you in some way. I know that part of my reason for not looking people in the eye when I pass them stems from bullying, but other than that there’s no reason for it. I really do try to give eye contact and a friendly smile.

It just seems sometimes that the world has become a much more depressing place. Nobody talks to each other any more. Some theorists believe that we will develop telepathy in the future so that we can communicate, but I think, to be honest, that certain nationalities may just stop communicating altogether. I guess that was what Planet of the Apes was getting at with the idea that humans, as a race, would be dumb and unresponsive.

I hope it doesn’t happen, but sometimes it seems like a logical occurrence.

And now that I have you all thoroughly depressed by the sometimes meaninglessness of our existence… I shall tug on your melancholy some more. At least, I’ll let Banksy do it. The well known artist has created an introduction video for The Simpsons. It’s viewable on youtube, so, as a treat, I have embedded it right here. Enjoy! 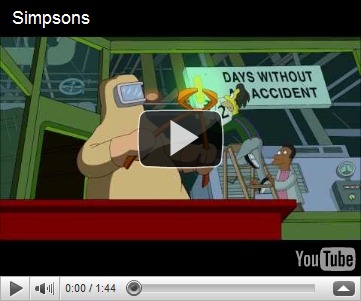 And, just so you know, all comments on this journal are always appreciated. Thank you!